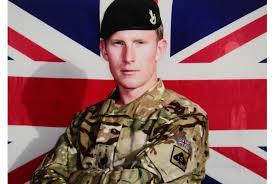 On 9th August 2012 Bristol’s first soldier to be killed in Afghanistan, Lieutenant Andrew Robert Chesterman from 3rd Battalion The Rifles was killed whilst commanding a vehicle patrol in Helmand Province.

As our thoughts and prayers turn to the season of Remembrance and the Nation remembers those who gave the ultimate sacrifice in past and present wars and conflicts our own neighbourhood will again reflect on this fallen son of Stoke Bishop whose untimely death his local Scout Group now wish to honour in living and lasting memory.

Andrew enjoyed Beavers, Cubs and Scouts locally at the 43rd Scout Group and went on to take part in Scout District teams for Ten Tors achieving Bronze Silver and Gold. As with so many before him, his time as a Scout shaped and developed the fine young man and gallant soldier he became.

The Scout Group Executive, Trustees and Team of Leaders faced with the dilemma of a failing hut and oversubscribed places for local children have taken inspiration from his life and service and committed themselves to build a new Scout Community Centre at the very heart of Stoke Bishop in his memory.

Andrew’s father Paul, a Scout Leader himself at the hut for many years commented;
“Anna, Olivia and I are fully supportive of the 43rd Bristol Scout Group’s desire to create a ‘lasting and living’ memorial to Andrew. He would approve in particular of the desired focus of the new building that it should be primarily a facility for the community’s young people.”

Tucked away off Kewstoke Road you will find the current Home and Headquarters of the 43rd Bristol (St Mary Magdalene) Scout Group. For over half a century thousands of local children have had unconditional access the life changing experience that scouting brings thanks to successive teams of of willing adult volunteers who support and sustain the activities.

With anticipated project costs in excess of £350,000 there is much hard work to be done to raise the necessary funds.

If you can help the Group in any way or wish to join our fundraising committee please see the main Scout Community Centre Appeal page for details.