The executive committee and trustees are all volunteers and are charged with the running of the 43rd Bristol Scout Group.

Andy was the Group Scout Leader until 2018 when he transitioned to be the Group Liaison Officer.

Nicky was Akela for the group from 2010, when her eldest son was a cub, until 2018 and she has now moved to become our Group Scout Leader. Nicky's 3 children have been through beavers, cubs/brownies, guides and scouts and her eldest now volunteers as a young leader with the cubs. The whole family love camping, walking & being busy outside. Nicky enjoys running the monthly Cubbacinno Cafe at the hut to raise funds ... and trying everyone's home made cakes!
First Guide Group: Holmes Chapel Girl Guides & Venture Scouts in Cheshire
Most Useful Skill: Crowd control & making pitta pocket pizzas on camp!!
Most Useless Skill: Ability to find fossils!

My son was enjoying Cubs at the 43rd when the two leaders gave a years notice - I offered to be a helper and found myself enrolled as Assistant Cub Leader. I learned a lot about Scouting and myself! I loved being involved and helping to come up with new and exciting programmes for each term - for five years. A new challenge came along to run the Beaver colony, which once again has been great fun, a joy to volunteer with another group of enthusiastic assistant leaders and introducing 6 year olds to the world of Scouting.

First Guide Group : I was a Girl Guide in Bude, Cornwall - I have fond memories of doing my first aid badge, helping at the local Nursing Home on Sundays for my Queen's Award and the monthly Scout/Guide discos.

Most Useful Skill - Putting my hand up!

Most Useless Skill - I have knitted the Queen.

Carolyn's two sons have been with the 43rd Group since 2009. Carolyn has actively assisted Group Leaders in Beavers, Cubs & Scouts along the way, as well as getting involved with fundraising as the need for a new hut has become an increased priority.
The fundraising committee is actively seeking grants & fundraising ideas, so please get in touch if you can help in our efforts to rebuild the Scout hut. 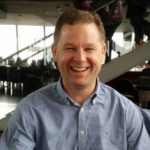 I work closely with our Group Scout Leader to encourage the development of Scouting within the Group and as part of the local community. I work hard to ensure the Group runs as smoothly as possible and is the best it can be.

I became Chairman in 2011 with no previous experience of running a volunteer Group. It’s been a rewarding and at times challenging experience! I’ve met so many wonderful people. I live in Stoke Bishop and am married with three teenage children.

Most Useless Skill: Cycling with no hands

Jon has been involved with 43rd Bristol Scout group since late 2016 when his son started in Beavers. Enjoying many years of scouting as a child, Jon relished the opportunity to be involved with scouts once more. He manages the group website as well as the facebook and twitter accounts along with most things digital!

Most Useful Skill : Can talk to computers...

Sarah volunteered to help with the 43rd Bristol Scouts as the group secretary in 2018. Her role involves many essential background tasks, such as taking the minutes of meetings, helping to keep all policies up to date and many other admin tasks.

Steve joined the 43rd as Scout Section Leader in 2014, taking over from Leigh and Pete who had been running Scouts gallantly for over 10 years. Steve comes from an educational and creative background so Scouts was a natural extension of his day job and he has two sons in the group which made volunteering an easy decision as he felt he needed to give something back.

Most Useless Skill : Clever ability to burn holes in shirts when ironing.

Scott oversees the finances of the group.